The Women’s Movement in Morocco: Bridging the Progressive-Islamic Feminist Binary

“Women’s Arab Spring”: that is the aspiration of many women around North Africa and the Middle East. As a young female Moroccan student, I am also involved in women’s empowerment in my country. However, since a very early age, I have misunderstood and rejected the opposition between so-called progressive and Islamic feminists. I have decided to carry out research in order to deconstruct dichotomous schemes (modernist/traditionalist) and demonstrate that the strength of women’s groups depends on their unity and autonomy. Therefore, I have studied the women’s movement as a dynamic, multidimensional, and interactive process of liberation.

I have first analyzed and compared the diversity of strategies adopted by feminist structures from the 1940s to nowadays. The overall goal of my research was to assess to what extent political affiliation and over-focus on political agendas have limited the effectiveness of women’s movements in enforcing social change in Morocco. I draw from both Islamist and secularist versions of Moroccan feminism to show that women organizations’ trapping in political frames has limited their margins of action and their efficiency in generating social change. The top-down approach adopted by feminist groups has been positive in accelerating legislative reforms in favor of women, but was insufficient in ensuring their effective enforcement in society.

Historical overview of the Women’s Movement: From dependence to autonomy

During colonization, the difficult entrance in the 1940s of the first generation of feminists in the public space was achieved through women’s groups within nationalist parties. Nonetheless, there was a double-edged sword in such an affiliation. If it presented women activists with opportunities (access to public space, channel to voice feminist concerns, skills and training), these gains came with a price. Feminists had to frame their activism as a secondary demand in the broader (masculine) political agendas; they also had to comply with parties’ priorities and ideologies. Finally, political affiliation created a dependence that limited and even condemned women’s groups to disappearance. Political affiliation was a restrictive venue yet a necessary strategy. It enabled women groups to be legitimized, but women’s issues were marginalized because independence was the priority. 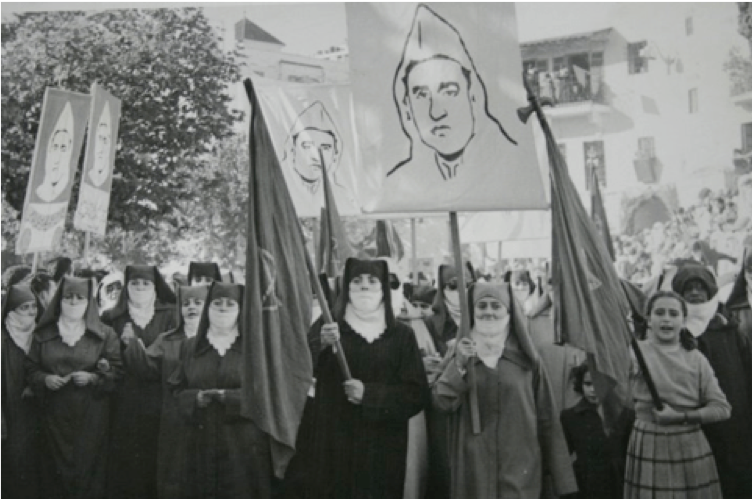 Demonstration of women calling for the return of the king in exile, Mohamecd V, during the French/Spanish protectorate; Tetuan, Morocco, 1953. – Zamane Magazine

Later, during the “years of lead” (1960s and 70s), the broader political context shaped the effectiveness of feminist groups. Authoritarianism and political repression negatively impacted feminist organizations. The lack of freedom provided little incentive for women’s initiatives. The channels for women’s groups were limited to official state-sponsored entities or political parties. In both cases, women’s issues were instrumentalized by greater political actors, which integrated women’s claims only when their demands were part of a national consensus. Knowing that women and family are located at the core of the Moroccan identity and society, any attempt to question family laws generated significant resistance. Therefore, political parties were very reluctant to deal with gender issues.

From the late 80s onward, similar pattern recurs.The assertion of Islamic feminists as new actors in the feminist struggle has carried both advantages and limitations. On the one hand, the appearance of a new, alternative model for gender relations has contributed to increasing the public interest and friendliness toward feminist issues. By adopting Islam as a tool for defending women’s rights and acknowledging the dominant traditions of society, Islamic feminists have ensured more connection to the masses. On the other hand, Islamic feminists have also been limited by their affiliation to political movements. Indeed, they have often been guided by the political structures to which they belong. Consequently, Islamist movements have used feminists for their own political agendas (competition with leftists). Finally, the political supervision of Islamist bodies has also restricted the margin of freedom for feminists. Islamic feminist structures are often compelled to limit their feminist claims to the broader Islamic model of society that political groups have drafted.

In the 1980s, for the first time, feminists remedied their institutional dependence. Indeed, this period of political appeasement encouraged feminists to create structures that are independent. In addition, the previous failures within political frameworks provided sharp lessons. As a result, autonomous women’s structures (associations, NGOs, etc.) were created. Through this autonomy, feminists gained in bargaining power. They resorted to a new repertoire of actions (petitions, sit-ins, rallies), and at the same time, they maintained alliances with progressive parties. This new balance had fruitful effects on the broader political and legislative landscapes. For instance, the women’s groups contributed to the reforms of the family law and the women’s status (Moudawana) in 2004. Nonetheless, autonomy is not a self-sufficient strategy. Women’s organizations’ top-down approach to social change is still problematic. If it undeniably accelerated reforms in favor of women, it did not necessarily change the lives of Moroccan women. The gap between legislation and practice  suggests that women’s associations should mobilize more resources to reach out to the masses.

Even if the Arab Spring did not give birth to a new women’s movement per se, it offers opportunities for more efficient women’s action. The experience of Moroccan women in this context can be useful in drawing parallels with women in other countries of the region. The Arab Spring has contributed to the diffusion of a “culture of protest” in the Moroccan streets, and if the traditional institutions (political parties, parliament, government) have remained widely unrepresentative and inefficient for women’s causes, the streets have emerged as a more open platform for subaltern action. 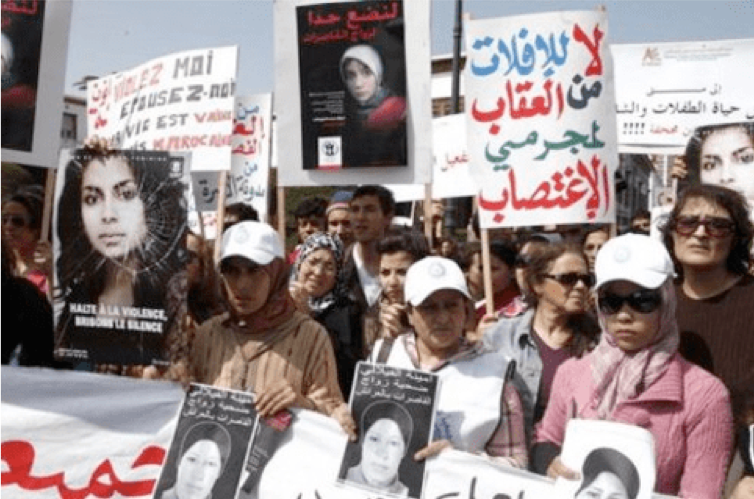 Women’s protests against rape, calling for the abrogation of Article 475 of the penal code; Morocco, March 2012. – LavieEco

It is important to examine the dynamics of women’s mobilization within larger protests.

Women and men share a common set of problems in Morocco. Millions of men and women suffer from unemployment, poverty, corruption, nepotism, and political misrepresentation. Consequently, when protests sparked on Moroccan streets starting from the 20th of February, the youth-led pro-democracy movement included many female activists. Women within the 20th February movement participated in all activities from decision-making to coordination and action. Like their male counterparts, they were involved in marches, rallies, public meetings, demonstrations, strikes, and sit ins. They also were spokespersons of the movement: they chanted slogans, led the masses, and spoke up in TV interviews. Women were not only showing their support from the backstage; many have come to the forefront of the movement.

Furthermore, the extensive use of technology and social media asserted women’s causes in Morocco and mobilized women. Indeed, social media challenged gender divisions. It permitted young women to “bypass the men – fathers, brothers, husbands – who circumscribed their worlds and their ability to com-unite”. The internet took power away from the patriarchal powers; it opened a new space for meetings, sharing, and learning. However, one can not deny that women were also subjected to pressure. Even if Morocco is a relatively open society, conservative attitudes are still important. Female activists have been victims of violence and intimidations.

Thus, the calls for democracy have asserted the citizenship and role of women in society. Nonetheless, we can wonder if the national protests were marked by an awareness and defense of women’s rights per se. Even if women were key players in what we can call the Moroccan Spring and participated in the elaboration of demands, those demands were pro-democracy and not gender-oriented. In other words, like their male counterparts, women have asked for constitutional reforms, fighting corruption, seeking freedom, but their demands were not specifically feminine/st. From the interviews I have conducted with pro-democracy activists (men and women), there was no focus on gender equality and women’s rights. The equality of men and women was not absent, but was rather integrated as one element of a broader call for democratization.

Last but not least, we should look beyond the protests themselves and study the (long-term) structural impact Arab uprisings had on the women’s movements. Much more than giving a voice to women’s protesters, the Arab Spring has transformed their repertoire of action and provided them with new energy and tactics. Actually, the Arab Spring set fertile ground for more awareness, mobilization, and pressure for women’s causes. A few months after the protests, there were several illustrations of this process.

The youth who manipulate technology offer new channels and contribute to the regeneration of a more horizontal women’s movement. In addition to demographic rejuvenation, education and internet access have opened up women to new horizons and models. For instance, female teenagers have initiated an adapted version of the slut-walk called “Woman Choufouch.” It fights sexual harassment against women and draws attention to the hardship women go through in the Moroccan public space on a daily basis. Similarly, a feminist e-magazine “Qandisha” was created. This collaborative feminine support aspires to give a voice to Moroccan women.

However, the main event that crystallized the new dynamic within women’s collective action is the death of Amina Filali on March 10, 2012. The death of this 16-year-old woman who committed suicide after being married to her rapist provoked a public debate and drew attention to women’s rights in Morocco. This specific case demonstrates how social media reshaped women’s movements’ organization methods. Social media was used to share information and focus public attention. A Facebook page – “We are all Amina Filali” – was created, while hundreds of citizens expressed their outrage through tweets and an online petition. Social media was also a tool for coordination. The internet infrastructure was particularly appealing and effective because it is open to a wider public and is more participative. Several hundred people demonstrated and organized sit-ins to demand changes to the penal code. It helped traditional women’s structures to initiate a national debate on a subject long considered taboo.

As a young Moroccan, I am aware of the challenges ahead, yet I feel quite optimistic. Indeed, I am convinced that the context of the Arab Spring has emphasized the potential of the youth and technology. If we learn how to optimize these opportunities, I am sure that we, women of Morocco and the world, will contribute to reenergize the women’s movements and promote a “bottom up” push, one that reaches out to women from all backgrounds regardless of the “modern” or “traditional” labels.

Lamia Bazir is a graduate student in international development at SciencesPo in Paris. Her research and activist interests are in women’s empowerment, democratization, and public affairs in Morocco and the wider MENA region.