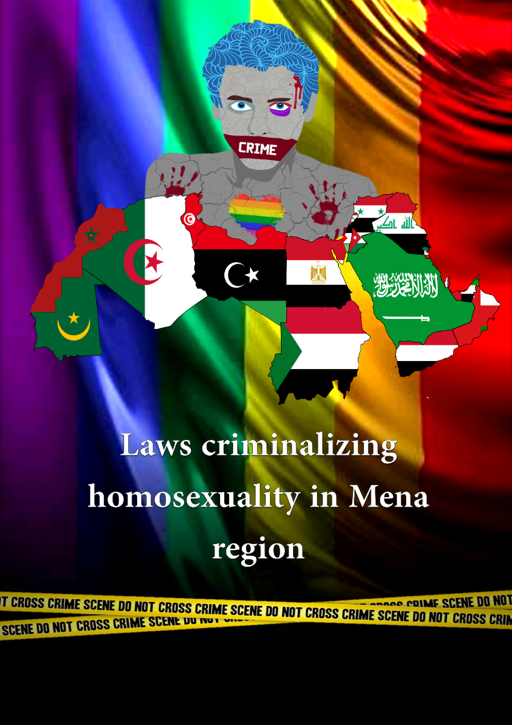 Countries where Homosexuality is still a Crime

In the Middle Eastern region, there are 13 countries that still criminalise homosexuality. Of these 8 have ratified the ICCPR, but none have submitted themselves to the jurisdiction of the UN Human Rights Committee by ratifying the Optional Protocol to the ICCPR.

“(1) A person who commits adultery or pederasty shall be sentenced to long imprisonment.

(2) In one of the following cases commitment of the acts, specified above, is considered to be aggravating conditions:

In Afghan legal terminology “pederasty” appears to refer to intercourse between males regardless of age.

Egypt : The Law on the Combating of Prostitution and the Penal Code have been used to imprison gay men.Law 58/1937 promulgating The Penal Code

“Detention for a period of not less than six months and not exceeding five years, or paying a fine of  not less than five hundred pounds and not exceeding one thousand pounds shall be the penalty inflicted on whoever exploits and uses the religion in advocating and propagating by talk or in writing, or by any other method, extremist thoughts with the aim of instigating sedition and division or disdaining and contempting any of the heavenly religions or the sects belonging thereto, or prejudicing national unity or social peace.”

“Whoever commits in public a scandalous act against shame shall be punished with detention for a period not exceeding one year or a fine not exceeding three hundred pounds.”

Law 10/1961 on the Combating of Prostitution

“Punishment by imprisonment for a period not less than three months and not exceeding three years and a fine not less than 25 LE and not exceeding 300 LE […] or one of these two punishments applies in the following cases: (a) Whoever lets or offers in whatever fashion a residence or place run for the purpose of debauchery or prostitution, or for the purpose of housing one or more persons, if they are to his knowledge practicing debauchery or prostitution.

(c) Whoever habitually engages in debauchery or prostitution.

Upon the apprehension of a person in the last category, it  is permitted to send him for a medical examination. If it is discovered that he is carrying an infectious venereal disease, it is permitted to detain him in a therapeutic institute until his cure is completed.

It is permitted to determine that the convicted person  be placed, upon completion of his sentence, in a special reformatory until the administrative agency orders his release. This judgment is obligatory in cases of recidivism, and the period spent in the reformatory is not allowed to be more than three years. […]”

Palestine : The British Mandate Criminal Code Ordinance, No. 74 of 1936

Section 152(2) criminalizes sexual acts between men with a penalty of up to 10 years.

Sodomy is sexual intercourse with a male.

In case of sodomy both the active and the passive persons will be condemned to its punishment.

Punishment for sodomy is killing; the Sharia judge decides on how to carry out the killing.

Sodomy involves killing if both the active and passive persons are mature, of sound mind and have free will.

If a mature man of sound mind commits sexual intercourse with an immature person, the doer will be killed and the passive one will be subject to Ta’azir of 74 lashes if not under duress.

By confessing after four lashes to having committed sodomy, punishment is established against the one making the confession.

A confession made before receiving four lashes (to having committed sodomy) does not involve punishment of “Had” but the confessor will be subject to Ta’azir (lesser punishments).

A confession is valid only if the confessor is mature, of sound mind, has will and intention.

Sodomy is proved by the testimony of four righteous men who might have observed it.

If less than four righteous men testify, sodomy is not proved and the witnesses shall be condemned to punishment for Qazf (malicious accusation).

Testimony of women alone or together with a man does not prove sodomy.

The Sharia judge may act according to his own knowledge which is derived through customary methods.

Iraq : After the American invasion in 2003 the Penal Code of 1969 was reinstated in Iraq. This code does not prohibit same-sex relations.  However, various reports have shown that self-proclaimed Sharia judges have sentenced people to death for committing homosexual acts and that militias frequently have kidnapped, threatened and killed LGBT people.

“Consensual intercourse between men of full age (from the age of 21) shall be punishable with a term of imprisonment of up to seven years.”

Such relations with a man under 21 years of age are criminalised by article 192.

“Any sexual intercourse against nature is punished with up to one year of imprisonment”.

“The following are deemed as disgracing crimes:

Sexual acts with a female over the age of 16 are prohibited by article 281, while sexual acts with a male are prohibited by article 281 and 285. Along with the civil Penal Code also Islamic Sharia Law is in force in Qatar, although only applicable to Muslims. The offence of “Zina” makes any sexual act by a married person outside of marriage punishable by death, while sexual acts by non-married persons are punishable by flogging – both offences no matter if they were heterosexual or homosexual.

Saudi-Arabia :
There is no codified Penal Law in Saudi-Arabia. Instead, the country applies strict Islamic Sharia Law. According to the interpretation sodomy is criminalised. For a married man the penalty is death by stoning, while the penalty for an unmarried man is 100 blows of the whip as well as banishment for a year. For a non-Muslim, who commits sodomy with a Muslim, the penalty is death by stoning. Moreover are all sexual relations outside of marriage illegal in Saudi-Arabia according to the Sharia law, including sexual relations between women.

“Any unnatural sexual intercourse shall be punished with a term of imprisonment of up to three years.”

All sexual acts outside of heterosexual marriage are banned in the United Arab Emirates.  However, whether sodomy is punished with death penalty remains in dispute. The Arabic text of article 354 is ambiguously phrased and can be translated in different ways. Some sources indicate that the article punishes rape of a woman or forced sodomy with a man, while others indicate that it punishes rape on women and sodomy between men.

Apart from federal law, consensual sodomy is criminalised in the emirates of Dubai and Abu Dhabi.

“Homosexuality between men is defined as penetration into the anus. Unmarried men shall be punished with 100 lashes of the whip or a maximum of one year of imprisonment, married men with death by stoning.”

“Homosexuality between women is defined as sexual stimulation by rubbing. The penalty for premeditated commission shall be up to three years of imprisonment; where the offence has been committed under duress, the perpetrator shall be punishable with up to seven years detention.”

Previous Interview with Abdellah Taia
Next The Women’s Movement in Morocco: Bridging the Progressive-Islamic Feminist Binary

Powered by TheVoiceOftheQueer | Shared by The Voice Of The Queer
© Copyright 2022, All Rights Reserved