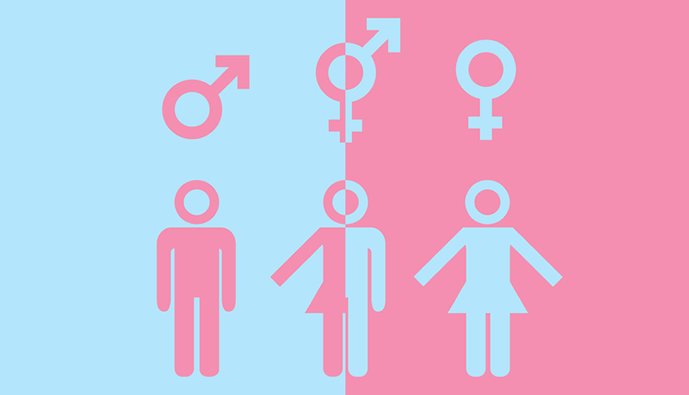 When filling out official documents, you are often asked to provide your name, birth date, and sex or gender. But have you ever been asked to provide your sex and your gender? It may not have occurred to you that sex and gender are not the same. However, sociologists and most other social scientists view sex and gender as conceptually distinct. Sex denotes biological characteristics and exists along a spectrum from male to female. Gender, on the other hand, denotes social and cultural characteristics that are assigned to different sexes. Sex and gender are not always synchronous, meaning they do not always line up in an easy-to-categorize way.

“Sex” refers to physiological differences found among male, female, and various intersex bodies. Sex includes both primary sex characteristics (those related to the reproductive system) and secondary sex characteristics (those that are not directly related to the reproductive system, such as breasts and facial hair). In humans, the biological sex of a child is determined at birth based on several factors, including chromosomes, gonads, hormones, internal reproductive anatomy, and genitalia. Biological sex has traditionally been conceptualized as a binary in Western medicine, typically divided into male and female. However, anywhere from 1.0 to 1.7% of children are born intersex, having a variation in sex characteristics (including chromosomes, gonads, or genitals) that do not allow them to be distinctly identified as male or female. Due to the existence of multiple forms of intersex conditions (which are more prevalent than researchers once thought), many view sex as existing along a spectrum, rather than simply two mutually exclusive categories.

A person’s sex, as determined by his or her biology, does not always correspond with their gender; therefore, the terms “sex” and “gender” are not interchangeable. “Gender” is a term that refers to social or cultural distinctions associated with being male, female, or intersex. Typically, babies born with male sex characteristics (sex) are assigned as boys (gender); babies born with female sex characteristics (sex) are assigned as girls (gender). Because our society operates in a binary system when it comes to gender (in other words, seeing gender as only having two options), many children who are born intersex are forcibly assigned as either a boy or a girl and even surgically “corrected” to fit a particular gender. Scholars generally regard gender as a social construct—meaning that it does not exist naturally, but is instead a concept that is created by cultural and societal norms.

Since the term “sex” refers to biological or physical distinctions, characteristics of sex will not vary significantly between different human societies. For example, persons of the female sex, in general, regardless of culture, will eventually menstruate and develop breasts that can lactate. Characteristics of gender, on the other hand, may vary greatly between different societies. For example, in American culture, it is considered feminine (or a trait of the female gender) to wear a dress or skirt. However, in many Middle Eastern, Asian, and African cultures, dresses or skirts (often referred to as sarongs, robes, or gowns) can be considered masculine. Similarly, the kilt worn by a Scottish male does not make him appear feminine in his culture.

“Human sexuality” refers to people’s sexual interest in and attraction to others, as well as their capacity to have erotic experiences and responses. People’s sexual orientation is their emotional and sexual attraction to particular sexes or genders, which often shapes their sexuality. Sexuality may be experienced and expressed in a variety of ways, including thoughts, fantasies, desires, beliefs, attitudes, values, behaviors, practices, roles, and relationships. These may manifest themselves in biological, physical, emotional, social, or spiritual aspects. The biological and physical aspects of sexuality largely concern the human reproductive functions, including the human sexual-response cycle and the basic biological drive that exists in all species. Emotional aspects of sexuality include bonds between individuals that are expressed through profound feelings or physical manifestations of love, trust, and care. Social aspects deal with the effects of human society on one’s sexuality, while spiritualityconcerns an individual’s spiritual connection with others through sexuality. Sexuality also impacts and is impacted by cultural, political, legal, philosophical, moral, ethical, and religious aspects of life.

The terms “sex” and “gender” have not always been differentiated in the English language, and it was not until the 1950s that they formally began to be distinguished. In an effort to clarify usage of the terms “sex” and “gender,” U.S. Supreme Court Justice Antonin Scalia wrote in a 1994 briefing, “The word ‘gender’ has acquired the new and useful connotation of cultural or attitudinal characteristics (as opposed to physical characteristics) distinctive to the sexes. That is to say, gender is to sex as feminine is to female and masculine is to male” (J.E.B. v. Alabama, 144 S. Ct. 1436 [1994]).

The standard model of the difference between sex and gender says that one’s sex is biologically determined (meaning that when a child is born, doctors classify the child as a particular sex depending on anatomy), while one’s gender is socially or culturally determined (meaning that the way in which that child is raised, socialized, and taught determines whether they take on masculine or feminine traits). The standard model has been criticized for saying that humans are sexually dimorphic: this means each and every human being is either male or female, thus leaving out those who are born intersex. The standard model explains that gender is categorized into two separate, opposing sides, being either masculine or feminine, again completely excluding those who are intersex, transgender, androgynous, and so on. Modern scholars such as Anne Fausto-Sterling and Bonnie Spanier criticize the standard binaries of sex and gender, arguing that sex and gender are both fluid concepts that exist along a spectrum, rather than as binaries.

Previous The Women’s Movement in Morocco: Bridging the Progressive-Islamic Feminist Binary
Next Freedom to Malak Elkashif and Hossam Ahmed